Let’s say you’ve been given the task of creating a new feature at work. You created a new branch with git checkout -b my-feature-branch and you are being careful to make many commits to keep track of your progress.

We’ve all created commit messages that weren’t too helpful or descriptive. You completed the task and you’re ready to create a PR (pull request), but you realize the only commit that really matters here is the most recent one, finished feature. There isn’t a reason to push all of these commits to the remote repo. You can use interactive rebase to clean up your feature branch prior to pushing and creating your PR.

Let’s say you want to squash the commits on my-feature-branch into a singular, descriptive commit.

You can run git rebase -i HEAD~4, which will open your text editor in interactive mode. It should look something like this: 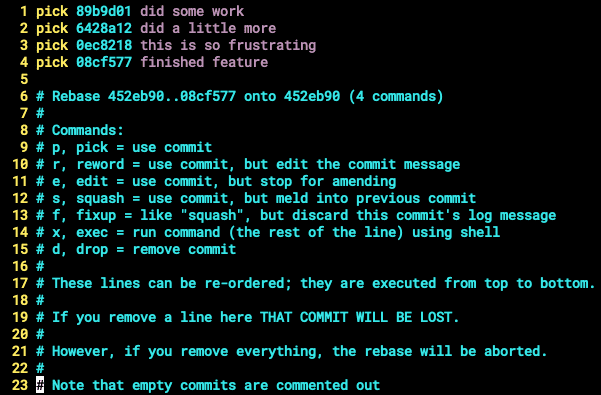 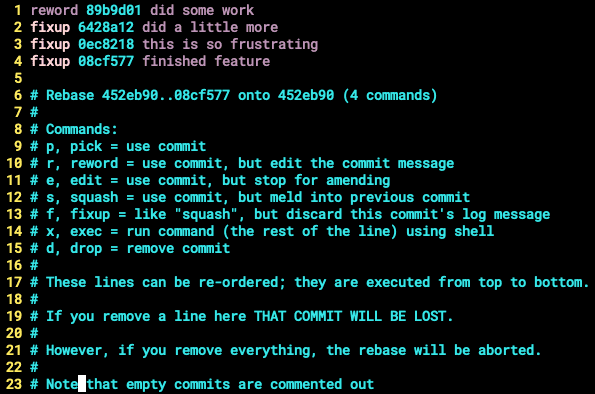 After saving the changes made in interactive mode, you will be prompted to provide the new log message for your reworded commit. In our case here, we are changing the did some work message to properly reflect the changes that were squashed from the other commits.

After saving your new, shiny commit message, your commit history should be squashed into one, descriptive commit that contains your changes made on my-feature-branch!

Awesome! rebase is an extremely powerful tool that does much more than renaming commits! Some teams prefer to rebase feature branches onto their main working branches instead of using the more conventional merge commit workflow. However, there are caveats to using a rebase workflow that you must consider. When you rebase, you are rewriting history, so all rebasing should be done on local branches only! I suggest checking out this article that does an amazing job of explaining rebase and things to look out for.

Rakeem is a front end engineer who likes to build web apps with React, NodeJS, and GraphQL. He's always down to learn new things and meet new people! Feel free to reach out on Twitter